There are literally hundreds of students attending school at the Hope in Haiti schools who have no sponsors. This is the story of one. 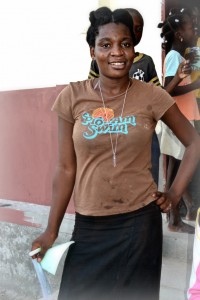 If you walk onto the grounds of the elementary school Hope in Haiti works with in Nan wo, Haiti, you might see a shy face peek around the corner of the building, peering out to see who’s visiting. If you walk up to her, you’d find that this quiet girl is named Nerla. Her natural beauty is obvious but she still reaches to cover a recent scar on her lip. If she shyly offered to show you around, she would probably show you her home: a 10’x10′ concrete room she shares with four other teenage girls. Nerla is nineteen–the oldest of them. Materially, she is also probably the poorest, if you can even compare one person’s poverty to another’s in Haiti.

Nerla is here for one thing: She left her three brothers and two sisters back in the mountain village of Kawo so she could come here and complete her sixth grade of school. It is not uncommon for children to get a very late start to an education, especially if the family has no money. Nerla attended Hope in Haiti’s other school in Kawo for six years, but now in a second effort to pass 6th grade, she is actually living on the school grounds in Nan wo. In fact, she tries to spend all her time there, not even going into town like the other students. Still, she misses her family and her home in Kawo. The scar on her face came from a recent motorcycle taxi accident while catching a ride back from the end of the Kawo trail at the foot of the mountains.

Nerla wants to be a nurse some day so she can take care of her parents and neighbors, but this means she has a long road ahead academically. How will she do it? God knows. In the mean time, she likes to cook, so she has made it her job to cook for the other girls she lives with. She prays for her mother and father. Her mama is a Christian woman who cooks over a charcoal fire, washes her clothes in the stream, and has to carry all her cooking and drinking water in a bucket on her head. Her father, who is not a Christian, gardens a small parcel of land for food and does some construction for money.

Nerla came to know Jesus Christ as her savior in 2010. “I love Jesus because He saved me. He died for my sins and gives me wisdom, and so He makes me rich. He will supply all my needs.”

What would Nerla do if she ever met her goals, became successful, and had money to spare? “I would help my family and give them what they need.  They need money so they can help their other children.”

With the challenges of difficult classes and unrelenting poverty threatening her at every turn, you would think Nerla would be discouraged and give up hope. You would think that after failing to pass her grade last year she would have put away the books and joined the other women her age scratching out a living in the markets to survive. But she presses on. Her hope is in the Lord. “Nothing is difficult in Christ.” 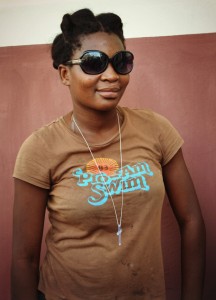 If you would like to be Nerla Aluis’ sponsor or find out about sponsoring one of the hundreds of others awaiting your help, write to info@hopeinhaiti.org