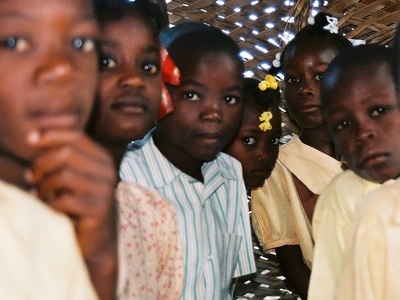 Welcome to Hope in Haiti.  The dream began in 1987, with a desire in the hearts of Dick and Dixie Montgomery to share the love of Christ by taking their family to work with children in a poor country.  In 1989, with eight kids, they pulled up their roots in Duvall, Washington, cried some tears and set their faces toward a new vision.  Believing that God had called them to work in an orphanage in rural Dessalines, Haiti, they built a house and moved into the orphanage and into the hearts of the Haitian people.  It was during this time that they met Louinet Gilles, a young man of 19, and encouraged and supported him through Bible college.  Louinet became a pastor and began a church, which continues to grow and now includes a sister church and two primary schools, serving the poorest of the poor in the hills and mountains outside of Dessalines.  After two years of working with the orphanage, the Montgomery’s came home on furlough bringing with them an addition to their family, a little Haitian baby.  The country and government of Haiti were again in chaos, and so after much prayer they decided to settle in Monroe, Washington, and continued to adopt kids.

Over the years, Dick and Dixie kept in touch with Louinet Gilles, helping him when they could, and in 2005, they returned to Dessalines for a visit.  Seeing Louinet’s faithful service gave them the desire to get involved in more ways.  But in January 2006, Dick died suddenly in a car accident, leaving Dixie and now 16 kids.  God has promised to care for the widows and the orphans.  He has promised in our anguish to set us free.  He has promised that weeping may endure for a night, but joy comes in the morning.

And so, this family saw God’s hand, even in their pain, and the seed of a dream planted back in 1987, continued to grow.  In early 2007, Dixie took eight of her kids and a niece back to Dessalines with the vision of starting a sponsorship program for the schools that Pastor Louinet was leading through his two churches.

Now twenty years after a dream was planted in the hearts of a family, a ministry commences in memory of the life and vision of Dick Montgomery.  Hope in Haiti is another strand woven in the tapestry of God’s work – a work of reaching out with the love of Christ to those most needy.

May your hearts be touched and filled with great love for these children living in the poorest country in the Western Hemisphere.  Thank you for your sponsorship and your involvement in Hope in Haiti. Thank you for investing in the life of a child and providing hope for the future.