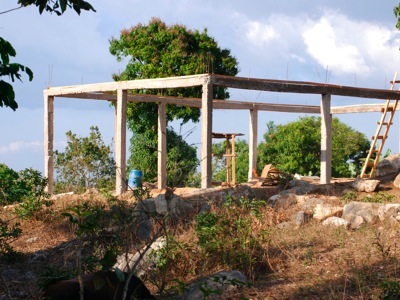 After a rough series of flight cancellations, snow storms and an airport evacuation we all arrived safely in Port au Prince, Haiti for the March 2008 Mission trip to the village of Kawo.  We regrouped and repacked at our base camp home in the city, owned by local missionaries from Idaho.  The next day began with a four hour open air, pick up ride to Dessalines. It was a dust cloud on wheels.  The team, 11 in all, was composed of Montgomery’s and Robinson’s (Jonathan being the youngest at eight years and five days.) We spent the night in Dessalines at the Ebenezer Glen Orphanage. The morning brought an early departure for the Kawo in a rented truck that cut off a large portion of hiking.  Anyah came down with a bug and sadly could not make the hike to Kawo.  We began the hike at the base of the mountains rising out of the Artibonite River valley. We ascended the “vertical sauna of death” for about 5 miles in the heat and humidity of the day, climbing 3400 feet to the ridge. Out of water and very tired, we welcomed the assistance of the adults and school children who came to help carry some of the loads.

Kawo is a collection of a several hundred families spread out in a random pattern in the hills around the Schoolhouse.  Children seem to just materialize out of the surrounding limestone and tropical forest hillsides when school is about to begin. There are roughly 350 children attending the Kawo School.  We treated the teeth of all that attended with a fluoride foam, sending them away with their very own toothbrush individually selected by Jonathan. The forty foot by twenty foot schoolhouse now has a skeleton of rebar and cement poised on the edge of a hillside near the water spring. From the schoolhouse there is an amazing view of the valley to the west and north.  The roofing material had been carried up prior to our arrival balanced on the heads of many of the children.  In the two and a half days we had to help in the village we attended one of two weddings, the baptism ceremony for four of the villagers, and several dedications during the Sunday service.  Asher and Will led the way assisting in the construction of the ten trusses that will support the galvanized metal roof. Grace, Cheryl and Dixie individually identified the children and with some added personal information, prepared signs for the documentation and photos.  Emma and Rachel photographed the children for our records while Jonathan and Penny performed the fluoride treatments.

The mountain people are a wonderful collection of hard working, welcoming, and helpful souls.  It was an honor to serve and share a meal with them. Our return is greatly anticipated by both the team and the village. God’s loving hand is so present in the mountains!  We see it in the surrounding landscape and the number of hearts opening to Him. The future of the children educated here just seems to be more secure as they learn not only the “Three R’s” but also the love of their God.

Our time in Kawo flew by and it seemed only a moment before we were repacking our small camp and heading back to Dessalines.  The hike out took us in a different direction, following a path used by an earlier Montgomery team trip.  The GPS indicated Dessalines to be roughly thirteen miles away as the crow flies. Fortunately we only had to hike the first ten miles of rugged, exposed, dry and hot trails before being greeted by a well timed red pickup truck. The hike out included many wonderful events; Jonathan was able to share candy with three boys who had never met a white person; Dixie discovered that candy, as breadcrumbs, marks a trail well; Tony cut his left thumb, twice; Penny is way tougher than she thinks; Asher and Will are “Storm Trooper” hikers; Rachel and Cheryl shot hundreds of photos; and Emma and Grace longed for the speedy ripening of the green hard mangos hanging by the hundreds on trees along the way.  It was a great adventure.

The next morning, washed and semi-well rested, we rode the three hours in another pickup back to Port au Prince. The trip was a wonderful success. Kawo now has a multi purpose building, needing only rock walls that will be used to protect and house the children for school and provide a location for Sunday services.  Future trips will undoubtedly be made to the village to support the families there.  There is also a project near Dessalines in the town of Nawo where another schoolhouse/church is being built. Currently it consists of a floor plan and a foundation, soon the voices of school children with ring through its corridors and out its windows. You to can be a part of Gods work in Haiti, just step out on faith and see what God can do.- Written by Tony Robinson

God is continuing to do a great work through Hope in Haiti.  We now have accurate records and up to date photos of the Kawo school children. The new school and church building with a metal roof will be a huge improvement for the entire Kawo community.

Thank you for all your many prayers, contributions and sponsorships!!!  Most of all thank you for believing and partnering with us to spread hope in Haiti.

I lift my eyes up to the mountains – where does my help come from?  My help comes from the Lord, the Maker of heaven and earth.  Ps. 121:1-2